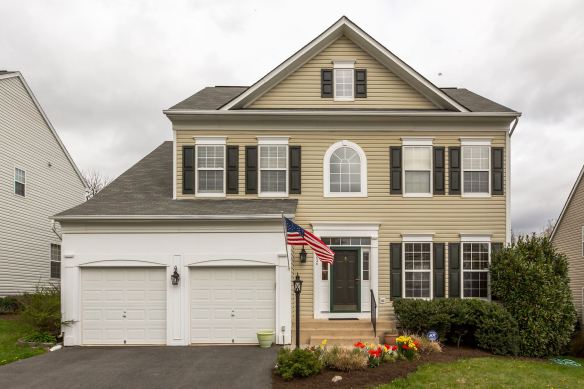 It all began about two years go.  Yep.  Two years ago.  That’s when the seller of this Waverly model in Braemar, located at 10024 Naughton Court, first reached out for me to give her an idea of what she would need to do to get her house ready for market.  She knew that there was a lot of updating that needed to be done and knew that she wouldn’t be able to do it over the course of a few months.  So we met and talked about what buyers expect when they are buying a home in Braemar.  Updated kitchens, new carpet, fresh paint and sometimes updated bathrooms.  Wanting the top of the market, the seller got to work over those two years.

The kitchen was remodeled with granite counters, a gorgeous tile back splash and stainless steel appliances.  The white cabinets were also given updates to make them fresh again.  The basement flooring was replaced with luxury vinyl plank.  The master bathroom got a fresh face of ceramic tile and new fixtures.  And windows and doors in need of replacement were taken care of.  Even the exterior light fixtures were changed from the worn out brass to an oiled bronze.   The result was definitely a crowd pleaser.

Ideally the seller wanted to move in June, so her thought process was to list in late May and accommodate that.  We talked about the current state of the market in early 2019 and I counseled her that April was a better choice if she could do it.  Buyers were knocking themselves out to get Braemar homes, offering longer settlement dates and rent backs.  No real estate agent has a crystal ball, but who knew what would happen as we got closer to school being out and summer.  Past years indicated we could expect more homes flooding to market and longer marketing times as buyers were more interested in summer vacations.  So the seller listened to her experienced Braemar Listing Agent and put the home on the market April 13th.  Sure enough, within one day she had two offers both above her list price of $529,000 and both accommodating her desired settlement date in mid June.

On June 17th, this Waverly model in Braemar sold for $536,000.  The seller had to give no closing cost assistance and had a smooth transaction from start to finish with her buyers.  The only real kerfuffle in the deal was done at the hands of the Braemar covenants inspector.  Having the ear of our portfolio and general managers on-site, I was able to remediate one of the issues with a simple phone call.  A little common sense goes a long way.

When the time to sell your Braemar home is looming on the horizon, don’t think you are asking too much to meet with your listing agent well in advance.  The best agents in the business understand that it is never too early to get professional advice on updating your home.  And my knowledge of our neighborhood real estate market is a skill I hone daily.  Since 2005, No One Knows Braemar Better!

Gray, overcast weekend days are perfect for getting things done.  In my world, being a full-time Bristow Real Estate Agent, that means taking time to run numbers for any one of my Braemar Property Value Reports.

This particular report focuses on March and APril sales in the Arista Series.  Arista Series homes are the large, single family homes built by Brookfield Homes.  The floor plans include the Allister, Buckingham and Canterbury.

There was only one sale of a Braemar Arista Series home during the months of March and April.  It was a four bedroom, four and a half bathroom, three finished level Allister on a cul-de-sac lot.  It was located at 9535 Laurencekirk Place and listed for $499,000.  It was sold by an investor who had recently picked it up at the foreclosure auction and improved it with new carpet and paint.  It sold for $499,000 after only four days on the market.

If you placed your Braemar Arista Series home on the market, priced to current conditions, the six month average and median marketing time suggests you would be under contract in a little less than one month.  You could also expect to shell out some seller subsidy, also know as closing cost help to the buyer.  The six month average and median numbers put that expectation anywhere between about $7,300 to $10,000.

The next Braemar Property Value Report will be out in July and will give us more recent information as we pull in May and June’s data into our rolling averages.  Until

then, when you are ready to sell your Braemar home, give me a call.  Since 2005, No One Knows Braemar Better!